skip to main | skip to sidebar

The Heart of a Child's Tale

An Interview with Artist shichigoro-shingo
Part 1 of 2 (link to Part 2)
Click on any picture to largify
KINDLY NOTE: this interview took place several weeks before the devastating series of events that struck Japan in March of 2011. We are very happy to report that we were able to quickly contact shichigoro-shingo and that he himself is doing well, despite the on-going struggles facing the entire country.
We ask you to please to keep the people of Japan in your thoughts and to continue doing what you can to help. ZN suggests helping out many of the artists and other creative talents out there who have donated their work and time to this and other causes, as well as considering donations to established groups such as the International Red Cross and Doctors Without Borders.
ziggynixonziggynixonziggynixon 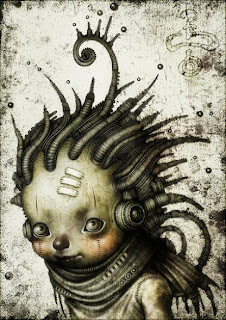 The culture of Japan fascinates me.
Despite that succinct line, I did consider for some time if that is how I wanted to frame my feelings. But I think that ‘fascinates’ is the right word here. I have to confess that I know far too little about the TRUE culture, the history or even the mythology of the Japanese people to make any kind of ‘expert’ opinion to same. Sure, I know much of their modern history – which is as filled as any country’s with both positives and negatives – and have delved into a fair (not great, just fair) deal of their traditional art forms over the years. Sure, I’ve worked with and gotten to know several Japanese colleagues as well, but that only provides a small thumbnail shot of the overall complex picture that is Japan.
The legends of the samurais; the grand tales of

thousands of years of regional conflicts, sometimes in order to control what we would today see as something so benign as the fine art of paper-making; even a sense of loyalty that I can not begin to fathom all make up a large part of this vague yet very strong impression. Heck, my curiosity no doubt owes a great deal to any of a number of genius tales from Mike Mignola that take place in Japan and which continue to spurn on my curiosity.
So it should have been somewhat UN-surprising that shichigoro-shingo’s (aka Shingo Matsunuma) work intrigued me so much. Starting off on my journey from his fantastically structured and playful home website, his work struck me as being so mysterious, a tad eerie and even ethereal in its wispy execution. What with the other-worldly depictions of futuristic meldings of machine and man or his depictions of Shelley-esque creatures of peace and innocence, it all should have fit right into my preconceived notions about the art of the Japanese, yes? Well, no.

Instead, I have to confess that this talented young man’s work hit me like a hard shock. A blow to the body, if you will, that took me back in time even to the earliest days of OMNI magazine and my first exposures to such ‘classic’ greats as H.R.Giger, Frank Frazetta, or Roger Dean. Back to a time when my own tastes and interests in the world of art, fantasy and much more were being formed! Leanings that would later be further solidified by various amazing works across all media, including again from Mignola (‘Hellboy’) or Del Toro (‘Pan’s Labyrinth’), Giger (e.g. the Aliens series) to just about any of Tim Burton’s works, also taking into account those he’s produced such as the more recent masterful apocalyptic tale, ‘Number 9’! Sheer genius! Sheer delight! 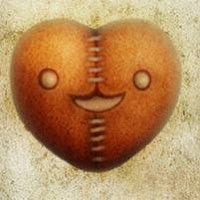 So I am pleased then to introduce you to the fantastic world of our guest, a world where – despite the presence of Borg-like cybernetics, abounding mysteries, deep sea wonders and more – the artist insists ‘there is no fear; no fear of creatures and no fear of machines ... just no fear!’ Just look closely and perhaps you’ll see a little red balloon or two floating peacefully by ...
ziggynixonziggynixonziggynixon
Mr. Matsunuma – or as I see you sign your correspondences, ‘shichigoro-shingo’ – welcome! Can you please tell us a little about yourself and your background? 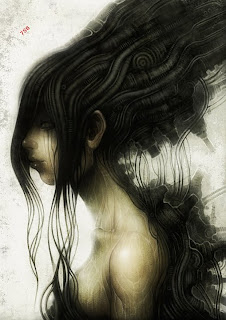 Thank you, Ziggy, for your kind invitation.
Well, my age is a secret! But I can tell you that I live in Yokohama-city. This is the capital city of Kanagawa Prefecture. We are the second largest city in Japan by population after Tokyo, which is to the north of here.
In terms of my education, I graduated from Tama Art University (Department of Painting, Oil Painting Course) in Tokyo.
How did you become interested in art and who were your major influences?
I have always liked drawing. Even as a child, I liked drawing pictures.
In terms of my major influences, I have been inspired by many great artists and other forms of art through the years. These include:

- Katsuhiro Otomo's movies and comics;
- Katsuya Terada's and H.R.Giger's artworks;
- Mamoru Oshii's, Jean-Pierre Jeunet's and Jan Svankmajer's movies;
- Amanita Design's games as well as Kowloon's Gate (video game for Playstation)
and many more. As you see, I enjoy many different artworks, movies, comics, and games!
How would you describe your style?

I like to think of my work as organic and inorganic matter fused together.
Still, it is very important to my that in ‘my world’ there is ‘No Fear’! No fear of creatures, no fear of machines, just absolutely no fear!
What techniques do you use?
A lot of my works use Photoshop.
I will also use a few textures from things as simple as a wall. But I am mostly using a Wacom pen tablet for my work today.
I am curious about the name ‘shichigoro’? How did this come about?
I am sorry, but there is no deep meaning to this! 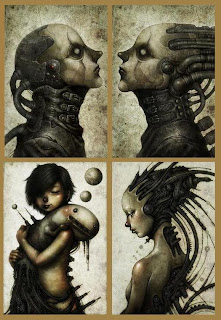 Ziggy Nixon
First, why the name? I honestly have no idea except for the perverse desire to stay semi-autonomous. It was just the amalgamation of two bits that for me say it all (noting though I only rarely played guitar and I'm really not a crook). I'm doing this because I've found that my new "hobby" - interviewing extremely talented and clever people in the "design" field (whatever the hell that means) - is the most fun I've had alone (except for, you know, golf) in a long time.